Returning from South Africa, and following the big build up and hype of Comrades; I had to work on settling back into UK life and regaining some speed. After a week or two fairly chilled and with no structure to training (although from a personal life perspective not remotely chilled!), I returned to UK general practice work and also launched myself back into training with Bearbrook Running Club and a more structured plan with the goal being New York Marathon at the start of November.

The general structure of training was 2-3 times a week at running club sessions held on Monday/Tuesday/Wednesday plus running there and back for an average of 7 miles a pop. [Mondays were generally steady runs, Tuesday speed work, and Wednesdays off road]. I also tried to get in a yoga session, a long run, a parkrun, and a bit of strength work each week (but as per usual the weights were what fell by the wayside for me), plus 1 rest day usually Friday. I also did some occasional run commuting to get in extra miles, and tried to fit in as many different parkruns as possible (realising I was doing fairly well with the parkrun alphabet!)

I worked my little cotton socks off for Swansea parkrun. It’s a flat out and back along the promenade and a course with good PB potential so I wanted a good time but I was over 2 minutes slower than when I last ran there in the lead up to the Boston Marathon 2017. It was a good nudge to really get my speed work in more consistently. Over the summer, parklives were also offering a free post-parkrun yoga session on the beach so that was the draw to head to Swansea this week and it was absolutely lovely to have a stretch on the sand with the waves rolling in. I met up with my friend Kevin at South Oxhey parkrun. Our last parkrun together, I paced him to his PB at Cassiobury before going to South Africa. This time he cruised to a much faster time, and I crawled in quite a bit later. We’d run together in 1st and 2nd place until about a mile in and then I faded and he got overtaken to finish 4th for him and 7th (first lady) for me on an undulating grass 3-lapper.

Highbury Fields parkrun in London….5 laps….FIVE! It’s around the outside of a park on the pavement, and was surprisingly ok with overtaking and lapping people, but I can see it getting too busy and tight if it grows much in the next few years. 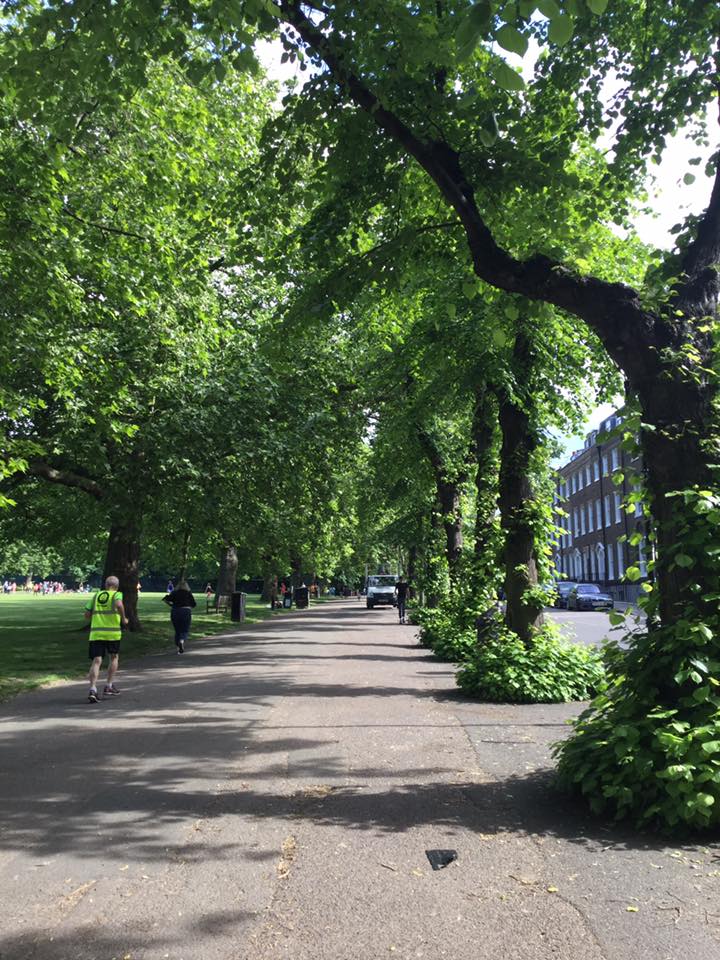 I met another running GP friend, Bella, at Upton Court parkrun for another undulating grass lapped course. Managed to beat my Oxhey time by almost 1.5 mins and ran my fastest time since before going to South Africa! I’m planning on going back to this one for a big sweaty GP meetup next month, and I hope to take at least another 30 seconds off to earn my bacon bap! The indoor area with drinks and food afterwards is great here.

When I moved to London in 2009, I lived on Old Kent Road (yep, the cheapest on the Monopoly board!) right by Burgess park. I remember going for a couple of runs around the lake, and also lugging my turbo trainer over there for a spin in the sun (much to the amusement of other parkgoers!). Burgess parkrun was actually lovely – the park is much bigger and much nicer than I recall. It was the day after my cousin’s wedding, so a few champagnes and cocktails down, plus sandwiching it mid 9 mile run, meant it wasn’t the fastest I could have been capable of on that course, but was pleasingly just 1 second slower than the week before. But I had good fun, and just pipped an old schoolmate to the line. Turns out he didn’t even recognise me when I chatted him to the end and sent me a facebook message just after the results got emailed out saying so. I’ll take that as a compliment that I’ve changed significantly for the better! Weirdly, first place overall shared my surname – Gush – not a common one, and wasn’t one of my entire family in town for my cousin’s wedding.

I wheezed my way around my home parkrun this week instead of travelling to Heartwood Forest for a spot of tourism as I’d planned. I wasn’t well so it took away the appeal of travelling, plus On The Run running club in Aylesbury were hosting a pacing and cake event so I didn’t need any more excuses to stay!

Wendover Woods is a beautiful place to run, and I’ve been able to link my place of work to this new parkrun through the RCGP (Royal College of General Practitioners) parkrun practice scheme. It’s a tough one with the first half mostly downhill, and the second half one long climb. I was still struggling with my breathing for this run, but there was no way I was missing out on the first running of this event, especially having bigged it up at work and managed to convince one of the partners to come too. 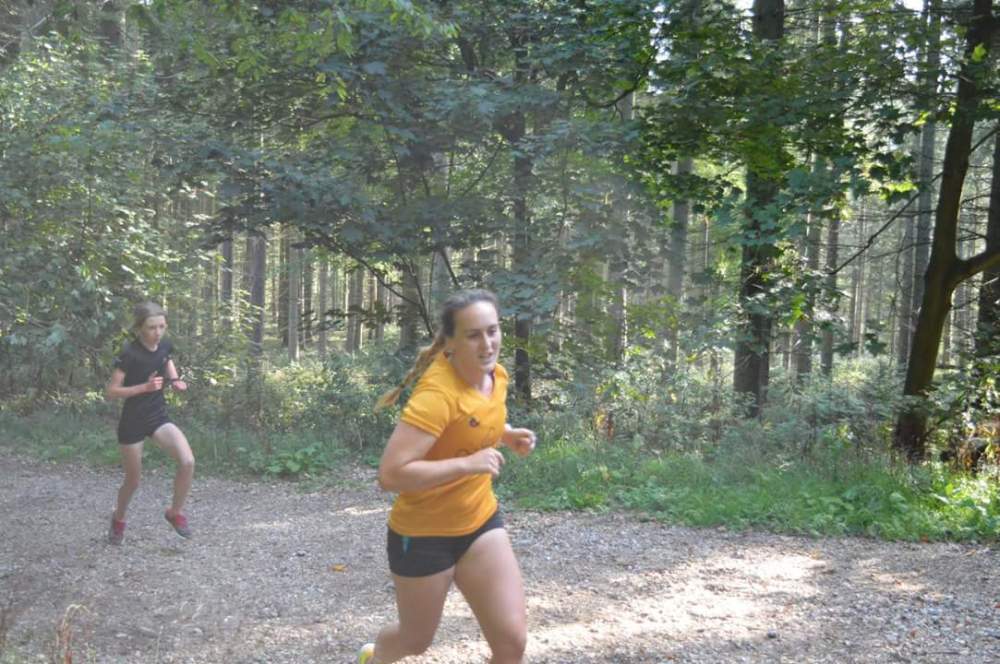 After skipping Heartwood Forest parkrun a few weeks ago, I didn’t have much time to fit it in before the event got closed down. I ran the penultimate event, and after a couple of cancellations, the final run was a few weeks later. At the time of writing, they’ve just announced that they will shortly be restarting at a new venue (TBC). It’s a shame this one got cancelled as it was beautiful. An almost 2 lap course, starting half way up the climb so you only do it one and a half times, and with a long fast downhill you get to do twice including into the finish line. I had a blast, and managed to beat my time from Upton Court to get a new season best in spite of it being mostly trail and very hilly. 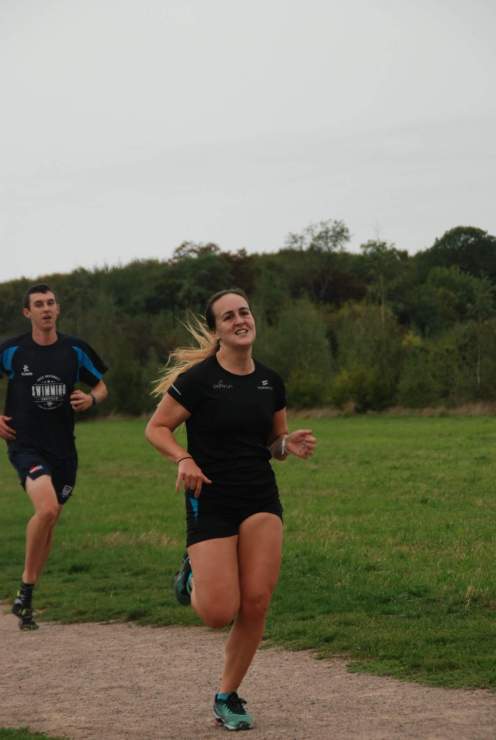 The club 10km handicap went better than expected with a 43:42, so halfway between where I was at the 10k races I did in South Africa and my best of 40:20 from 2015. Unlike the South African races, I didn’t suffer with gut issues afterwards so good news all round!

My long run was a midweek 25.5 mile trudge alone the Thames Path helping Alan recce for the A100 race. I really struggled, but it was partly mental as I knew we were pressed for time and I had an appointment to get to. It was a good boost to run a good 10km after this demoralising run. And at least we can count this as time on feet.

Tring parkrun this week was designated as counting towards our club cross country championship, and given I’d missed most of the year, I knew I’d have a job to get in 4 races and every chance would count. I love Tring parkrun and it was good to go back. I managed a course best of 22:56 on this hilly cross country course, which I’m absolutely chuffed with.

Another season best of 21:18 at Porthcawl parkrun on this day, gradually chipping away at my times and feeling good. This one was sandwiched into an 8.5 mile run in the rain, and I felt strong.

The next day I ran 13.1 miles solo around my childhood haunts before supporting my parents racing the Cardiff Half Marathon.

Henley parkrun was great fun – another hilly 2 lap cross country route, narrow at the start so limited overtaking there. But not a  huge turnout so it worked well. One of my favourite courses, with lots of tree cover and nice views. The barcode scanner even raced around to win by a couple of minutes and have a breather before taking on his duties!

Cross country subsequently felt unsurprisingly hard that afternoon – following up the morning’s double climb, this course had a long hill up and my quads were burning and not playing ball even after we plateaued at the top. It was also really warm after a morning of intermittent downpours. Great start to the cross country season. I pledged not to race parkrun in the morning beforehand next time, but I’ve already changed my mind as I just can’t resist!

The Royal Parks Half Marathon was a total washout…. my word it was wet! I had planned to run at marathon pace and take it steady, treating it as a long training run. Got there, and just decided to run off feel, turned my watch to a normal clock face and ignored it. But I felt like I was doing well, so I adjusted my goals in the first few kilometres, then about 2/3 through I started to struggle, faded and ended up really disappointed with myself. I tell myself no pressure, but it’s hard to really not feel it. I have to remind myself I raced twice the day before though and knew I was way off half marathon PB fitness. 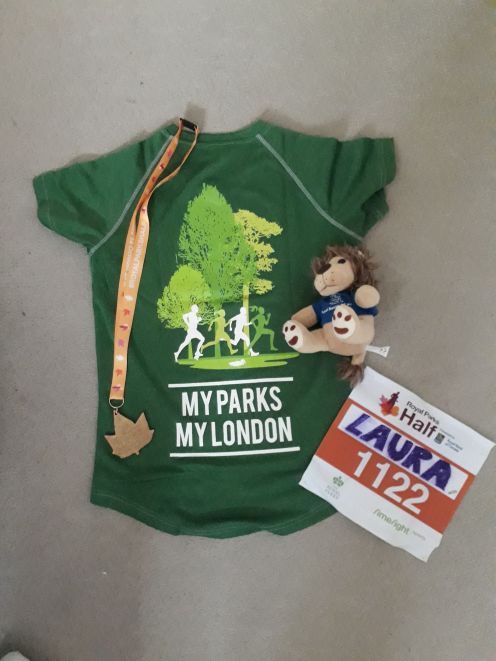 Back to Wendover parkrun, and without the wheezing, huffing and puffing, I managed to take around 40 seconds off my time. That’s going to be one I keep going back to and chipping away at.

Sunday I ran Abingdon marathon. Another supposed training run, but on the morning, I woke up to perfect marathon conditions and knowing Abingdon is a fast and flat course, especially compared to New York, wondered if I should just go for it and then “enjoy” New York. I didn’t want to ruin myself and end up struggling around New York though, so it needed to be a careful balance. I set off at a comfortable pace, which was faster than my goal marathon pace. Annoyingly my body just doesn’t settle into an 8 minute mile rhythm, and keeps dipping down to the mid 7s and my PB pace. But I couldn’t maintain it and when I started to tire, I faded to mid 8s plus from around 20 miles. I ran the first 8 miles with Gavin from my old running club in Cheltenham, before pulling away, though he sailed back past me at the 17 mile mark to post his marathon PB. I met my target time of 3:35-3:40 (actually ran 3:34:50) but not the readjusted target time I set mid way of 3:29! That will teach me to stick to the plan.

I did 3 decent workouts this week so I’m pleased it’s a sign that there’s more in the tank and I can push harder and faster in New York. I turned up to running club on Monday night hoping for an easy recovery run, and it turned out to be the 5k time trial….but ran a faster time than I did at parkrun when first returning from South Africa on post marathon legs. So that was good. Tuesday we did a reversal run and I made it to my usual spot in the 20 minutes and back much quicker than usual. Including warm up, cool down, and running to and from the club house, this was my 8 miler and longest run for the week. Thursday I did a track session of 400 and 800m efforts and had great fun running at the Stoke Mandeville Track for the first time. Sunday I got out for an early morning run in New York, checking out some Halloween decorations, and trotting up and down the High Line and the Hudson river.